The bacca pipes jig is our trademark dance – fast, complex and exciting. 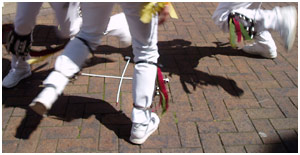 It is developed from an obscure Cotswold curiosity, traditionally performed over two crossed, long-stemmed tobacco pipes. We have several bacca-pipes dances, including versions for three or four dancers all performing over one set of pipes, crossing and turning with inches to spare. We also perform our finale dance over the pipes, which ends with dancer Tracy Seelig leapfrogging over the rest of the team in a single leap.

It took us 21 years to come up with our first stick dance. And when we did, it was like no stick dance any of us had ever seen before. For much of the dance, we have the wrong number of sticks. We throw them, then clash them,  and then a child gives us another stick, and off we go again. We’ve made some of the stick-throwing a bit more interesting since the first performance in 2018:

In the 19th century, the best morris dancers in the English Cotswold region would create their own one- and two-person jigs, sometimes competitive in spirit. Some would have special steps or features not found in team dances. We have followed their example to create several interesting and energetic Cotswold jigs in the traditional idiom, intended to show off the dancers’ skill. A number of these have won prizes in the jig competition at Sidmouth folk festival.

Broom dances are found in several parts of the UK. We have created two unique variations. One is a challenging solo dance with a number of impressive kicks and throws, drawing on early training in circus skills. The other is a piece for two dancers that is currently being rested. Neither of these dances is on YouTube: if you find online video of us broom dancing, it was improvised.

Humour has long been a part of the morris and we’re not afraid of having a spot of traditionally-inspired fun.

The Ugly Duckling and our Knees Up dance both involve hand-clapping choruses and a certain amount of physical contact between the dancers. These have evolved into a glorious and absurd entanglement of bodies, Knees Around, danced to a mangled version of Music For A Found Harmonium. All these dances use zippy, up-tempo tunes.

We have a fourth clapping dance, Shepherd’s Hey, that gives people of all ages a chance to dance alongside us and look gleefully ridiculous.

The horse dances too. After a fashion.